Finance Minster Jim Flaherty recently gave the income trust sector an unwelcome surprise. Prime Minister Harper had previously promised to “stop the Liberal attack on retirement savings and preserve income trusts by not imposing any new taxes on them”, but the government underestimated the momentum towards trust conversion and was facing a very significant loss of tax revenue. 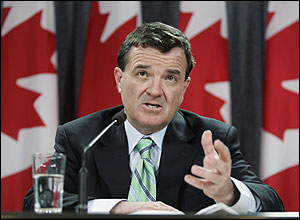 Not satisfied with merely preventing new trust conversions, Flaherty decided to impose retroactive tax measures on existing trusts. Many of these existing trusts happen to underpin conventional oil and gas production in Alberta – in fact the trust structure was initially developed to facilitate production from mature assets in the oilpatch. The proposed tax changes could therefore have a significant effect on energy production and the Alberta economy specifically. Departing Alberta Premier Ralph Klein welcomed the tax measure.

Alberta was hurt by the trust tax loophole. We were losing hundreds of millions of dollars in revenue.

However, he and the rest of Alberta may well be far less pleased once the implications of this experiment in retroactive tax policy come home to roost. END_OF_DOCUMENT_TOKEN_TO_BE_REPLACED

Imagine for a moment that we bought food in the way we currently buy electricity. We might order from a supply list with no prices marked and have whatever we fancied delivered to our door whenever we pleased. A single, un-itemized bill would arrive in the mail once every couple of months covering all the food ordered and delivered during the billing period. How would our food bills probably compare to what they are currently? How would we go about reducing our food bill in order to save money when we know nothing about the cost of each act of consumption? If the ‘Ministry of Food Supply’ were worried about the amount of food available, reliance on expensive imports or whether the delivery system might not be up to the task, what could they do to encourage a ‘food conservation culture’?What is missing from our hypothetical scenario is real-time price feedback, which would allow consumers to take responsibility for their own consumption. Its absence makes the task of trying to reduce demand much more difficult, both for consumers and for those trying to manage the supply. If we are ever to introduce a conservation culture, the tradition of passive consumption must first be challenged. END_OF_DOCUMENT_TOKEN_TO_BE_REPLACED