In 2004, the Ontario government committed themselves to installing smart electricity meters in 800,000 Ontario homes by 2007 and in all homes and businesses by 2010. It is doubtful whether this target will prove to be achievable, although pilot projects are being conducted.

How are smart meters being introduced?
In support of the Ontario Government’s smart meter initiative, six of the province’s major urban electricity utilities are working cooperatively under the brand name powerWISE® to implement delivery of smart meters to consumers on a province-wide basis. They are each undertaking smart meter pilot projects that involve installing the meters in customer’s homes in order to test the various technologies that will be required to deliver smart meter services.

The intention of the smart metering policy is to use time-of-day pricing to reduce peak demand by encouraging load shifting, as meeting peak demand during peak season frequently involves reliance on expensive electricity imports. Reducing peak demand could remove the need for new peaking plant and its associated transmission capacity, as well as dampening price volatility in the energy markets. It remains to be seen, however, how much load-shifting can be achieved under the policy as currently conceived.

Consumers were told they would be paying monthly for the new meters, but that the meters would help them to save money in the long-term as their consumption shifted to off-peak hours. However, opinions vary as to the scope for such savings. Given that the meters are likely to cost $400-$500, it is by no means clear that any savings will accrue to consumers.

The Features of Smart Meters

Smart meters will be required to:

· Measure and indicate consumption during prescribed periods
· Be adaptable to seasonal, time-of-use and critical peak pricing
· Be capable of remote reading
· Provide feedback on consumption no less than daily
· Provide bi-directional communication unless impractical 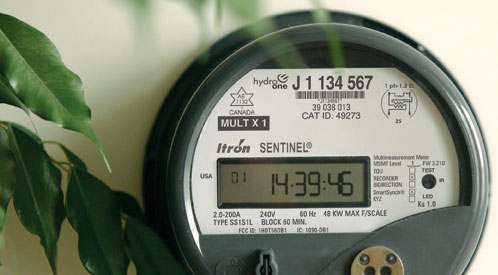 Being adaptable remotely allows the utility to alter the hours designating peak, intermediate and off-peak price bands in order to accommodate a different usage pattern on weekends and also seasonal variations in peak demand. As meters can also be read remotely, there will no longer be a need for a utility employee to visit in order to read the meter, and there will be no more estimated bills.

Critical peak pricing is a controversial element, which may or not be included in the final meter design. Essentially, a critical call is an override signal sent out by the utility instructing the meter to surcharge all consumption during time when demand is predicted to approach maximum available supply.

Critical-peak prices incorporate a dynamic component into the tariff by signaling relatively high peak-period prices to consumers only on a small number of days when market conditions are particularly dire. These days are not known until the day before they occur, at which time consumers are notified that the next day is a critical day when electricity will be more expensive than normal. Analysis of data from the first summer of the California experiment indicates that these “rifle shot” price signals can be both popular and very effective at reducing peak demand, thus dampening wholesale prices and helping to avoid the need to construct relatively inefficient peaking generators.

This feature is controversial, because it is not clear what the magnitude of the surcharge would be or how much lead-time Ontario consumers would receive that a surcharge would be in effect. In the event of a short-notice warning, given that potential power emergencies are not perfectly predictable, it is unclear how effective communication of the critical call would be in reaching a sufficient number of consumers to affect demand. Consumers could remain unaware that a critical call had been issued until the power shortage was already over, or may simply not be in a position to alter their demand immediately.

Its value as a price signal able to head off a power emergency would be limited under a delayed billing system with no access to immediate feedback. Unless critical calls were particularly frequent or the surcharge were set at a punitive rate, it is unlikely that even consumers who took no action at all would notice the effect on an amalgamated bill arriving two months later. Critical calls are therefore unlikely to differ materially from the current system of power warnings, which would suggest that the cost of enabling this capability is not justified.

Consumption feedback would be available on the internet or by telephone by 8am the following day, allowing consumers to check their consumption pattern and its effects after the fact. The present plan is for 13 months of data to be available to utility customers. It is unclear, however, how many customers – long encouraged to be passive consumers – would be willing or able to take advantage of this feature. Providing some feedback, albeit still delayed, is better than providing none, but in order to be truly effective, feedback needs to be readily available to all consumers in real-time.

The Ontario Energy Board (OEB) has directed all Ontario electricity distributors to collect 30 cents per month from each residential consumer in 2006 to fund initial start up costs. Preliminary estimates indicate that the incremental monthly cost for a typical residential customer may be between $3 and $4 per month once full implementation is complete. The OEB expects it to cost more than $1 billion to install the meters across the province. Hydro One alone has over a million meters to install province-wide.

The Ontario Energy Ministry says the meters now cost $400 a unit, but it estimates the cost will be closer to $100 when more companies start producing them. We have examined the cost-effectiveness of smart meters combined with innovative pricing for several U.S. utilities, as well as for Victoria, Australia (where the government is contemplating a policy like Ontario’s), and Singapore. Based on this work, it is likely the metering costs will exceed the benefits if the cost is anywhere near $400. Done correctly, however, the cost per customer based on a mass deployment of smart meters could be closer to $150. At that price, it is much more likely benefits will exceed costs.

The electricity rates proposed under the smart metering initiative (which are subject to change before the program is implemented) are not as variable as one might have expected for a program intended to achieve a significant amount of load-shifting. Given that these rates cover only the commodity charge – distribution rates and other fixed charges remain constant – the difference per kWh delivered is not particularly large.

Ontario Energy Board Time-of-Use Period and Pricing
(in cents/kWh, not yet mandatory)Weekends & Holiday ………. Off-peak ……. 3.5

The Impact of Price Incentives

There is already a growing number of consumers in Ontario who are shifting their load for altruistic reasons, particularly at times when the Independent Electricity System Operator (IESO) declares a power warning. They run their dishwashers after 10pm, turn down their air conditioners, do laundry on weekends, put their water heater on a timer or make other minor modifications at perhaps a small cost in terms of convenience. So far, due to the willingness of the public to conserve at times of peak demand when asked to do so, it has been possible to avoid declaring a power emergency when the system has been under severe strain. The IESO is concerned, however, that if power warnings should become more common – or even routine – in the future, a form of warning-fatigue may set in and the public response may diminish.

Smart metering in conjunction with time-of-day pricing is meant to bolster the altruistic impulse to conserve power when supply is tight, theoretically to a degree great enough to extend load-shifting behaviour to daily peak demand periods. Unfortunately for the policy makers, prices are not the prime motivation for those who load-shift now, and the difference between the proposed on and off peak rates is probably far too small to motivate many additional consumers to do the same.

On the other hand, if punitive peak rates sufficient to provide a genuine financial incentive to load-shift were mandated, it would have a highly disproportionate effect on those unable to alter their demand profile. Farmers, for instance, would be heavily impacted, as would the poorest consumers – generally those with the least flexible demand. As far as these consumers are concerned, price increases, whether based on time-of-day pricing or not, are a blunt instrument.

The poor often lack the information, resources and control over their own circumstances to change their demand, much of which is for non-discretionary uses such as heating. Half of Ontario homes which are electrically heated are occupied by those in the bottom income quintile, while very few in the upper half of the income scale heat electrically. If those electrically heated homes were also badly insulated, as the homes of poorer individuals often are, then the impact on the many at the bottom of the pyramid could be crushing.

It appears that the need to keep the impact manageable for those unable to load-shift will require maintaining a price differential which is too low to deliver much load-shifting by other consumers, and also too low to result in any savings for most consumers once the monthly charge for the meter has been taken into account. Spending a billion dollars up front, followed by an estimated $50 million per year in operating costs, in order to achieve a relatively small shift from coal-fired peaking plant to baseload nuclear and an estimated 5% overall reduction in residential consumption is probably not the best use of those funds.

A smarter metering alternative already exists and has been operating in one Ontario town since 1989. That will be the topic for Part II.